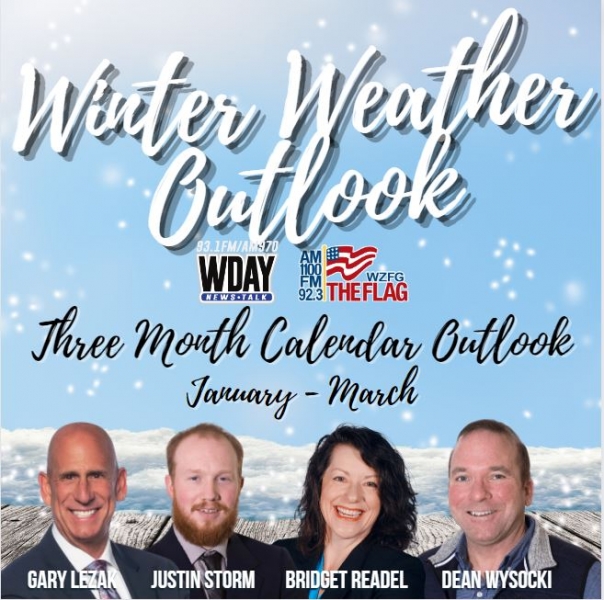 I've put together my forecast for the following three months through March. We're not quite through two cycles for this year's LRC pattern so I'm leaving it a little more broad-range for now and will be making a revised edition later on once I can average things out and really pinpoint the average cycle length since it likes to fluctuate between a couple of days. That being said I can still highlight dates when I expect potential storms to track into, or near our area. I won't highlight every little chance for snow, just the more dominant features that have occurred that would bring us a higher probability of receiving snow, or impactful weather. I will also try to highlight the timeframes I expect cold snaps to hit and last. In general, I expect this winter to be a drug out and cold one. There will be periods of normal to above average temperatures but as a whole, will likely average below average for temperatures. I am expecting near to above-average snow totals but will wait and see on that, as there are a couple of wild cards that could make or break that. I'll explain those a little deeper later on, and in the calendar. Keep in mind not every circled day means it will storm in Fargo, systems will have a tendency to shift location/track. But I do expect upper-level waves to support these storms around the dates selected. Additionally, keep in mind I'm circling time frames, not the duration of the storms. So if you see a circle over four days, I'm marking that time frame not necessarily a four-day storm.

Starting off to end December, the major storm system from last week was marked on our calendar and so are this week's storms bringing snow on Wednesday and blowing snow Thursday, and Friday while the main storm hits hard to our south. I do expect a second storm around the 27-29, but computer forecast models are not picking up on anything yet during that timeframe. Due to blocking this storm could be offset by a couple of days so let's just leave it as the back half of the last week of December, followed by more cold if that storm sets up. Will be interesting to see how this plays out, will it be a miss or will the models pick up on the storm...

January:
Anticipating that end of December storm, I expect cold air to linger into the first week of January with two or three systems tracking into the area that could provide some impactful weather with snowfall, or blowing snow. But I don't see a big snowmaker out of those two or three possible systems. One could potentially be deflected just south due to the cold air. If the End of December storm doesn't come through our area or tracks more northward, I would expect the first week of January to be not as cold, more January mild temps. Things look to go quieter for the second week of January until a possible system around the 14th, and the 17-19th, then likely more cold for about a week. One last potentially big Storm is possible to end January.

February:
In short, February looks to be cold, not that it's not most years but I see a likely chance for a one to two week cold snap in the middle of the month. I have highlighted in dark blue when it's most likely, then in light blue for a potential early start, and possibly lingering into the last week of February. I'd place my bet on the 9th through the 20th. There is also potential for another big storm around the 6th-8th, and two or three other systems within the week of the 13th and the 23rd.

March:
I see a couple of potentially big storm setups for March. one between the 17-20th and a second one, the 26-29th, somewhere within that time frame. Along with that, it looks likely to see another cold spill of air around the 6th of March for about a week, but I don't expect extreme cold, more seasonable for march but still probably 15-30 degrees below average so teens to single digits. Temperatures should begin to regulate closer to average or even a little above average for the back half of march but I expect will see another cool snap of air into April which could drag our winter out.

Looks for additional updates to come as we get further into the LRC, I will be able to fine-tune the forecast and get a better composite on the temperature trends and values into Spring. I will also forecast our spring as well in the weeks to come after we get 2-3 cycles to push through.