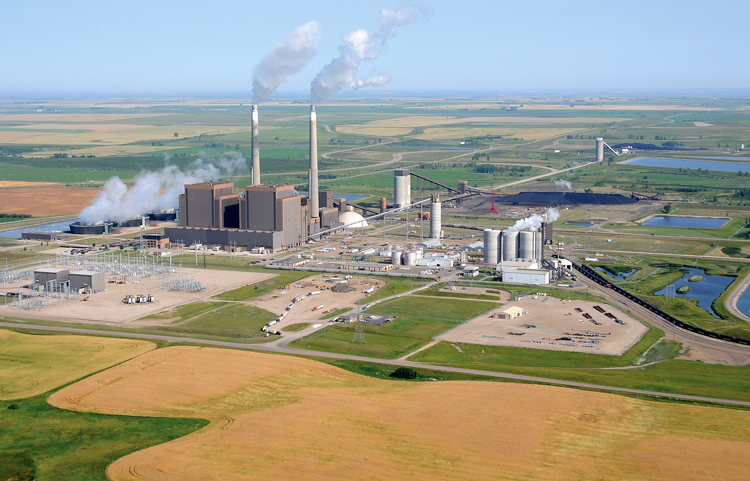 (Underwood, ND) -- Governor Doug Burgum and Lieutenant Governor Brent Sanford Monday highlighted the benefits of reliable, affordable baseload coal power and innovative technologies such as carbon capture as they joined officials and workers at Coal Creek Station to celebrate the finalized sale of the coal-fired power plant and a related high-voltage transmission line.

“This is truly a landmark day and a huge win for the 650 workers here at Coal Creek and Falkirk Mine, for the residents of McLean County, for the entire state of North Dakota and for U.S. energy security and electrical grid reliability,” Burgum said. “By preserving the reliable, affordable electricity that coal provides while also incorporating renewable power and innovative carbon capture, storage and utilization, this project will be a model of clean baseload power for the world. We’re deeply grateful to Loren Kopseng, Stacy Tschider and the entire team at Rainbow Energy for their risk-taking entrepreneurship that made this sale possible, as well as all of the local, state and federal officials and agencies who drove this deal across the finish line.”

Burgum and Sanford began working with GRE to facilitate a sale of Coal Creek Station to a third-party operator even before GRE announced in May 2020 its plans to close the Underwood plant during the second half of 2022. Burgum announced on March 25th, 2021, that GRE was in exclusive negotiations to sell Coal Creek Station and the transmission system. The pending sale to Rainbow Energy Center and Nexus Line was announced June 30, 2021.

“It was a tense seven months from when GRE shared its plant closure plans with employees until Rainbow came along with serious interest in buying the plant,” Sanford recalled. “This sale took time and an incredible level of commitment from many dedicated people, and it wouldn’t be possible without the innovation by state government, reasonable regulation of coal plants, becoming the first state in the nation to achieve primacy to permit a Class VI injection well, and world-class carbon capture research and commercialization right here in North Dakota. The benefits of this sale will be felt far and wide, most importantly by the Coal Creek and Falkirk workers and their families and the customers who benefit from a stable electrical grid in North Dakota, Minnesota and beyond. We’re thankful to the industry, the state Legislature and our congressional delegation for continuing to find a viable path forward for North Dakota’s abundant lignite coal.”

Burgum signed several bills last year that will support the lignite industry as it continues to innovate for the future and supply reliable, low-cost electricity for residents and businesses in North Dakota and beyond. Those bills included:

Burgum and Sanford also worked with lawmakers last year to create the Clean Sustainable Energy Authority and Fund, with $25 million for grants and up to $250 million for loans to support low-emission technology projects and help provide a long-term, viable path forward for the state’s critical energy industry. The Authority provided a $3 million grant to Midwest Ag Energy for a carbon capture project at the Blue Flint Ethanol plant next to Coal Creek and $7 million to the Energy & Environmental Research Center in Grand Forks for front-end engineering and design of Coal Creek’s carbon capture project.

Last Friday, the North Dakota Industrial Commission – consisting of Burgum as chair, Agriculture Commissioner Doug Goehring and Attorney General Drew Wrigley – authorized the North Dakota Transmission Authority to sell its first bond issue and with the proceeds provide a loan to Nexus to facilitate the purchase of the transmission line from GRE.

Burgum and Sanford have promoted an all-of-the-above energy approach based on “innovation, not regulation” to advance energy development with environmental stewardship. Under the Burgum-Sanford administration, in 2018 North Dakota became the first state in the nation to receive approval from the U.S. Environmental Protection Agency (EPA) to regulate geologic storage of carbon dioxide, which presents a huge economic opportunity for both the lignite industry and the oil industry through enhanced oil recovery.