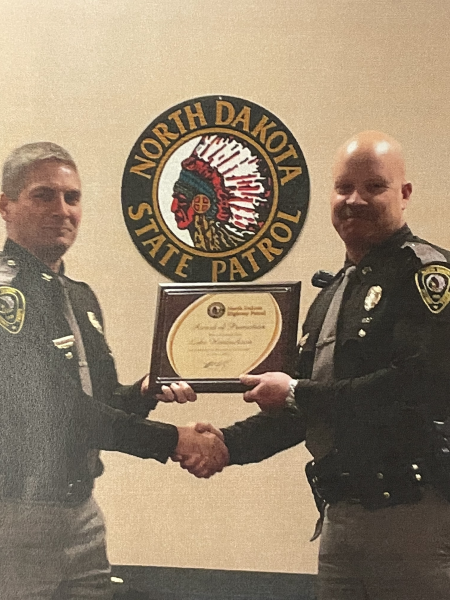 (Fargo, ND) -- Colonel Brandon Solberg has announced the promotion of Sgt. Luke Hendrickson to Lieutenant and reassignment to Northwest regional commander.
Hendrickson joined the North Dakota Highway Patrol after receiving a Bachelor of Science degree in Sociology from North Dakota State University in 2002. He attended the Highway Patrol Academy, graduating in October 2003. Following graduation, he was stationed in Devils Lake as a traffic enforcement trooper from October 2003 until December 2006, then as a traffic enforcement trooper until October 2013.

He was promoted to rank of Sergeant November 1st, 2013, and assigned as a regional sergeant in Fargo, where he currently serves.

Lt. Hendrickson received a promotional certificate and lieutenant bars at a ceremony at the Fargo regional office Friday.

He begins his duties as Northwest regional commander, stationed out of Minot, effective Saturday, May 29th.