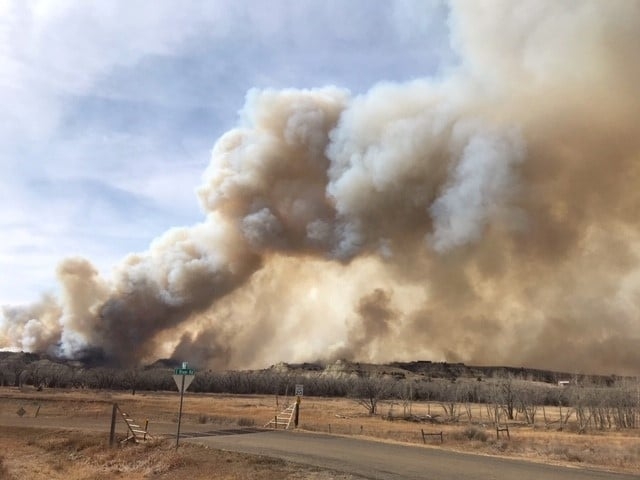 UDPATE: Fire crews say the blaze has burned roughly 3,000 acres, down from the approximate 9,600 that was earlier reported. Containment stands at 50%. All Medora residents have been allowed back in their homes.

(Bismarck, ND)  --  Governor Doug Burgum is declaring a statewide fire emergency in response to a Billings County wildfire outside the city of Medora.  The declaration made yesterday allowed the National Guard to deploy two UH-60 Black Hawk helicopters to fight the blaze, which broke out yesterday afternoon.  Agencies including the North Dakota Highway Patrol and the North Dakota Department of Emergency Services are assisting with the response to the fire.  I-94 had to temporarily closed because smoke from the flames reduced visibility  Fire officials are saying downed power lines are to blame for the wildfire in Billings County.  The Sheriff's Department says the 95-hundred acre blaze is burning through the Badlands.  The blaze broke out yesterday afternoon.  Several fire departments and law enforcement agencies are part of the response team.  First responders worked to evacuate Medora yesterday.