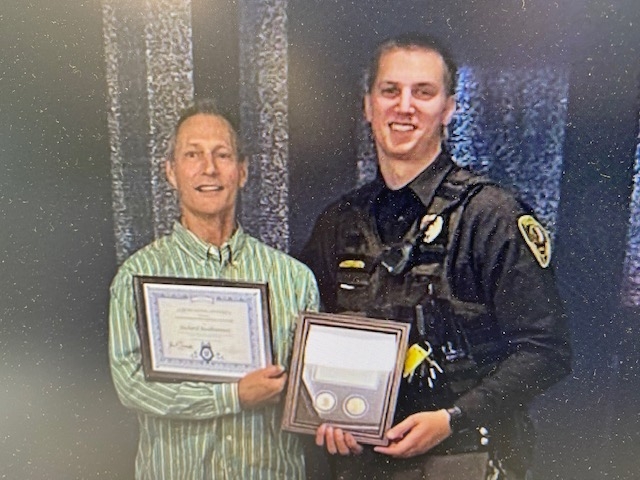 (Fargo, ND) -- A Moorhead man talked about the moments when he helped save a driver from a pickup truck that was sinking in Hobart Lake off I-94 just west of Valley City.

"We managed to get the individual out through the passenger window, and then the truck was capsizing, going down, nose down," said Richard Reidhammer.

Reidhammer and fellow Moorhead Wesley Kern recently received awards for heroism from the North Dakota Highway Patrol for saving the elderly driver and his dog. The man accidentally drove his pickup into the lake back on June 5th. The man, who is doing fine today, was experiencing a medical emergency when he lost control of his truck.

Reidhammer and Kern also pulled the man's dog from the truck before it sank. The 58-year-old says during the rescue he wondered if he was going to die because of the water's cold temperature.

"I actually thought I might die because the water, as Wes said, was very cold and they say that your body can start to go into shock from cold water. But yeah, I started getting scared. I was like oh my god, this is insane," said Reidhammer.

Reidhammer says the incident brought back memories of his sister, who died after drowning in a river in North Dakota when she was 12-years-old.