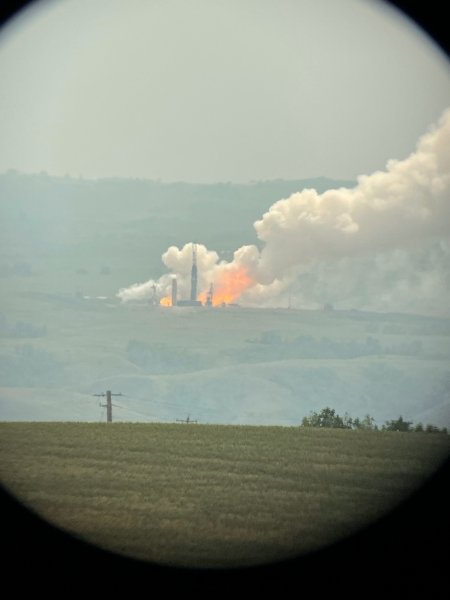 UPDATE AT 7:20 PM: (Tioga, ND) -- At this hour, the fire at the oil well, owned by Petro Hunt, still continues to burn. According to Beth Babb, of Petro Hunt, the fire began sometime earlier this afternoon. She says crews continue to actively fight the fire, while trying to gather more information on a potential cause.

"We are trying to gather as much information as we can," she said.

UPDATE AT 5:00 PM: (Tioga, ND) -- A fire at an oil well, owned by Petro Hunt, is currently burning south of Beaver Bay, near Tioga.

According to North Dakota Department of Mineral Resources (NDDMR) Public Information Officer Katie Haarsager, the fire has been confirmed to have happened on a workover rig, but no cause has been yet to be determined. She says that, in addition to local Emergency Medical Services and firefighters, the inspectors from the company and NDDMR are on location. Harsaager says the fire "did start earlier in the day and has since slowed a bit."

Karolin Jappe, Emergency Manager for McKenzie County, tells KTGO Radio that law enforcement currently have the roads blocked off around the site of the fire.

No injuries have been reported at this time.

KTGO Radio has reached out to officials at Petro Hunt for comment, but have been unsuccessful at this time.

ORIGINAL STORY: (Tioga, ND) -- There are reports of a Oil Well Fire just south of  Beaver Bay, near Tioga.

Initial reports say the fire is about 30 miles South of KTGO, and that all on the scene are okay.

We will provide updates as they come in.