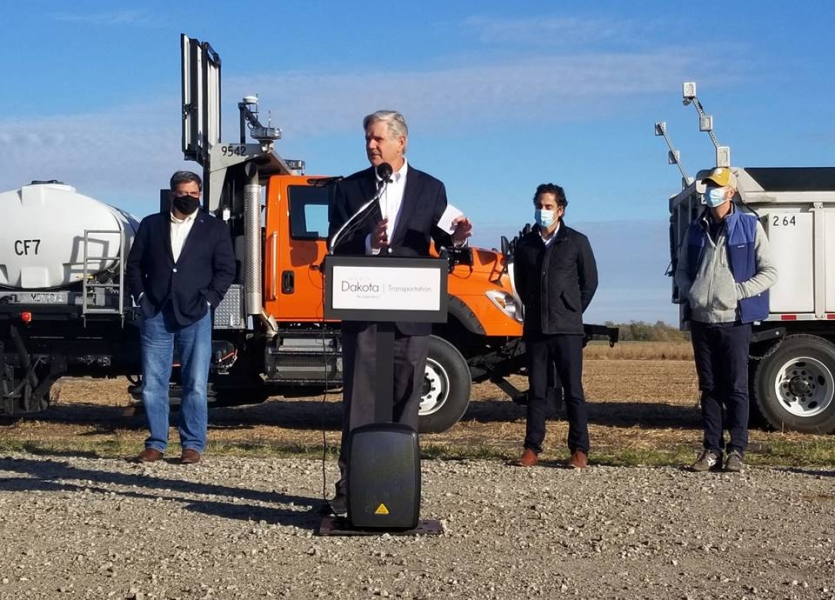 "I was the only person in the truck, and I was in the passenger seat," Hoeven told WZFG Radio's Scott Hennen. "This is about safety, innovation and the jobs in the future. It just shows what we're doing here with precision ag."

The senator drew parallels with the state’s unmanned aerial systems (UAS) industry, which he has advanced since his time as governor. Specifically, Hoeven worked to bring together a unique mix of state, federal, private and university partners to create a nationally-significant UAS test site and Grand Sky, a first-of-its-kind UAS research and technology park.

Hoeven highlighted how Grand Farm is taking this same approach and building a wide range of partnerships to secure the state’s position in the growing autonomous technology sector, including as it applies to the next generation of precision agriculture. This will help to address challenges faced by farmers here at home and globally, while also bolstering economic growth and creating good job opportunities for years to come. To this end, Hoeven is working to secure federal support for Emerging Prairie’s Grand Farm initiative, invest in broadband infrastructure to ensure the technologies developed by the initiative, like precision agriculture, can be implemented and support the success of the state’s tech entrepreneurs.

“The growth in North Dakota’s tech sector, especially in UAS, is the result of years of effort, where we built an ecosystem unmatched by anything else in the world,” Hoeven said. “We now have a premiere location for all things unmanned aircraft – research and development, training and operations, across civilian, military and government applications. Grand Farm represents the opportunity to do the same with autonomous technology and precision agriculture. That’s why we’re investing in the infrastructure we need, like broadband, to support these operations and building on the partnerships that Emerging Prairie has secured so far.”

As chairman of the Senate Agriculture Appropriations Committee, Hoeven secured $5 million for the Rural Innovation Stronger Economy (RISE) Grant Program, which supports innovation clusters in rural regions, and included language in annual funding legislation to prioritize projects like Grand Farm. Hoeven continues working with the administration to implement the RISE program, with a request for applications expected in early 2021.