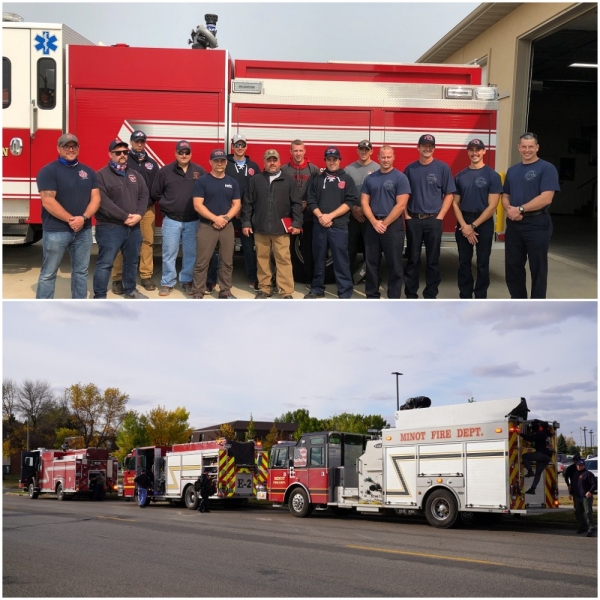 While in Oregon, North Dakota’s firefighters tented at a basecamp and performed structure protection missions for areas affected by the Slater Fire, which straddled the Oregon-California border, and the Devils Fire, further to the east.

“The crew jumped on every mission assigned to them, even with the long hot days and some chilly nights in the tent,” said Williston Fire Chief and Task Force Team Lead Jason Catrambone. “Over 13 days, we performed many different tasks that were new to those of us who had never been on a large wildland fire before. We are returning home proud and thankful to have been able to help the people of the Rouge Valley in Oregon.”

Some of the tasks the North Dakota team assisted with included clearing debris from around structural bases to expose mineral soil, clearing roofs and rain gutters, trimming trees and shrubs and shutting interior windows and blinds. They also conducted a late evening mission mopping up hot spots and controlling some active fire around the area of Takilma Road in Southwest Oregon to prevent it from crossing into a housing development.

Additionally, the team set up structural protection sprinklers around the Oregon Caves National Monument and Preserve. This equipment required the use of three portable pumps, portable water tanks and more than 1,000 feet of hose.

North Dakota’s volunteer task force was assembled after sourcing and coordination through the North Dakota Department of Emergency Services (DES). North Dakota has a long history of providing EMAC support to other states. Since 2005, DES staff have supported response agencies through EMAC during disaster events in six locations, including: Louisiana (2005 hurricane), Mississippi (2011 flooding), Puerto Rico (2017 hurricane), Florida (2017 hurricane), Hawaii (2018 volcano) and, most recently, in Oklahoma (2019 flooding/tornadoes).

An EMAC is an emergency response mechanism that allows states to send personnel, equipment and commodities to assist with response and recovery efforts in other states.

“North Dakota’s fire departments were honored to provide resources to the state of Oregon. The devastation that resulted because of these fires is exactly the reason EMAC was established. Large disasters like this are managed by leveraging the resources of many,” said Fargo Fire Chief Steve Dirksen. “We all were happy to assist and we wish the best for the citizens of Oregon as the state begins its recovery.”