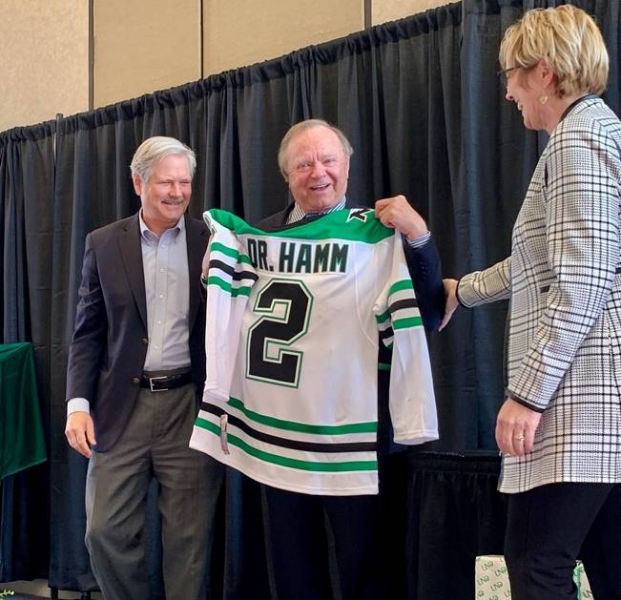 Senator John Hoeven today joined leaders from the University of North Dakota (UND), its alumni association and foundation and the North Dakota Petroleum Council in presenting Harold Hamm, founder and Executive Chairman of Continental Resources, with an honorary doctorate from the university. The senator remarked on Hamm’s entrepreneurial spirit and his many contributions to growing North Dakota’s role as a global leader in energy production, including pioneering hydraulic fracturing and horizontal drilling in the Bakken and his support to UND for its petroleum and geological engineering programs.

Hoeven also presented Hamm with a UND hockey jersey and arranged a video of congratulations from President Trump, which played this evening at the UND vs. Western Michigan Broncos hockey game, to help mark the occasion.

“Harold is a titan in the energy industry, leading the way in developing North Dakota’s oil fields and showing how innovation and new technology can unlock our energy potential,” said Hoeven. “We appreciate not only the good jobs and economic growth he supports in our state, but also his contributions to future generations through his generosity to UND. This recognition is well-deserved, and I look forward to our continued work together to advance our nation’s energy independence.”

As a member of the Senate Energy and Natural Resources Committee, Hoeven works to ensure America’s energy security by supporting an “all-of-the-above” strategy in the development the nation’s abundant energy resources. To this end, the senator works to provide regulatory relief from burdensome federal rules, streamline the approval of much-needed energy infrastructure and support state primacy over the regulation of energy development.

Further, through his role on the Energy Appropriations Committee, Hoeven funds programs that advance new technologies to support greater energy production with better environmental stewardship. These include developments in enhanced oil production and carbon capture, utilization and storage (CCUS) technologies.