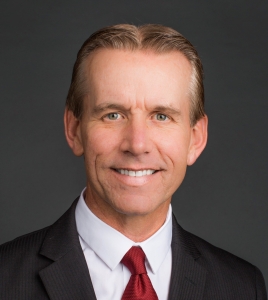 Kroshus, a Republican, was appointed to the Public Service Commission by Gov. Doug Burgum in 2017, elected by voters in 2018 and named commission chair in 2019.

He brings 30 years of private-sector leadership and business experience to state government. In addition to an extensive business background, he owns a cattle and grain operation in western North Dakota and is an avid outdoorsman.

“While we’re fortunate to live in a state rich in natural resources, it’s critical to manage them in a way that balances economic development with sound environmental stewardship,” he said.

Affordable energy is another top priority for Kroshus. “North Dakota continues to be a nation leader in providing low-cost, reliable energy service to households throughout the state,” he said. “Maintaining that status is essential, especially for those on fixed-incomes.”

As a parent, private-sector business leader and landowner, he understands the importance of listening to and meeting the needs of the state’s citizens effectively and efficiently.

“Public service isn’t about representing a ‘party of one’ or ‘party of some’ but effectively advocating for all North Dakotans,” Kroshus emphasized. “It’s a privilege to serve and I’m asking voters for the opportunity to continue working on their behalf.”

Applying the rule of law fairly and consistently is a philosophy Kroshus has held since joining the commission. “The role of the commission is to enforce statute, not apply the rule of personal preference,” he said.

“I’m proud of my work at the commission to date, but there’s still more to do”, Kroshus said. “I look forward to continuing to do my part in building a stronger North Dakota, one both current and future generations benefit from.”

Kroshus was born in Fargo and is a graduate of North Dakota State University. In addition to his work at the commission, he has served on numerous volunteer boards including as trustee of Missouri Slope United Way, Bismarck State College, Bismarck-Mandan Chamber of Commerce, Bismarck-Mandan Development Association, Sanford Health Foundation, Lewis and Clark Fort Mandan Foundation and Capital Gallery.

January 21, 2020 - 9:50am
Insurance Commissioner urges consumers not to wait to purchase flood insurance