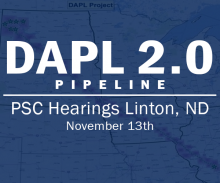 The North Dakota Public Service Commission will be holding a formal public hearing on Wednesday in the Emmons County Courthouse Auditorium in Linton in regard to a siting application by Dakota Access, LLC for a Dakota Access Pipeline pump station. The proposed pump station will consist of five 6,000 horsepower electrically driven motors and pumps, which will allow for pipeline transportation of up to 1,100,000 total barrels of crude oil per day.

Throughout the past weeks, AM 1100 The Flag has had a chance to visit with key officials regarding the upcoming hearing. Here’s a brief overview of the conversations What’s On Your Mind host Scott Hennen has had with the officials:

The North Dakota Public Service Commission’s hearing will be open to the public, and will begin at 9 a.m. Central time on Wednesday, November 13 at the Emmons County Courthouse Auditorium in Linton.

WZFG Radio's Scott Hennen will be live on What's On Your Mind from the hearing in Linton on Wednesday. The show begins at 8:30 a.m. Central time.