DeVos issues statement on reaction to 2019 Education Next Poll 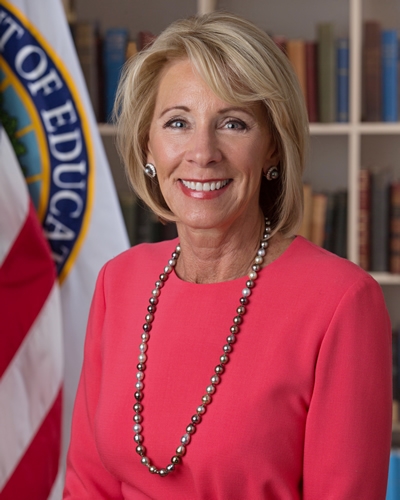 US Secretary of Education, Betsy DeVos (Courtesy of www.ed.gov)

U.S. Secretary of Education Betsy DeVos issued the following statement after Education Next released its 2019 opinion poll on education policy:

"The results are no surprise to those of us who believe in students and trust parents and teachers.

"American families want more control and more options when it comes to education, which is why every poll conducted shows the growing, bipartisan support for education freedom. This research is just the latest indication that voices of America’s parents are growing louder in demanding something other than a government-assigned, union-controlled school for their children. Behind each percentage point in the column for education freedom is the face of another forgotten voter who has been taken for granted for far too long. I hear it from students who want to learn more and learn differently, but are constrained by their assigned school building. I’ve heard it from parents across this country who worry that this generation won’t be prepared for the modern economy. And I hear it from teachers who are denied by the one-size-fits-all system the freedom and flexibility to teach in the ways they know will be most effective.

"Clearly, our Education Freedom Scholarships proposal is the solution American families want. This common-sense approach puts students and parents in control, without taking a single cent from public schools or teachers. It’s time opponents of education freedom tamped down their overheated political rhetoric and instead focused on improving student outcomes. They should take note that this poll shows students rank the quality of their own schools lower than anyone else does.

"Education freedom is on the march across this nation. Congress would be wise to heed the call of America’s families."